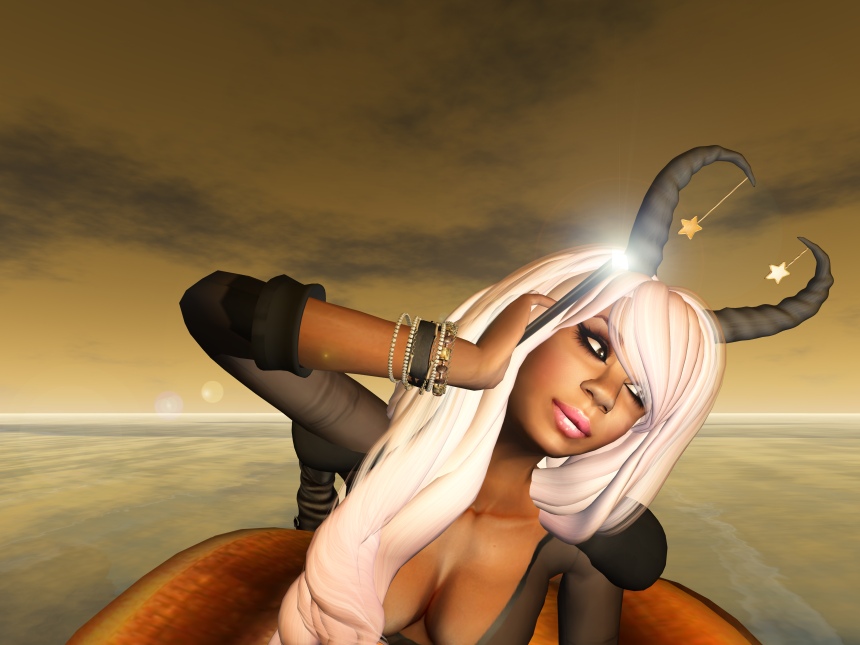 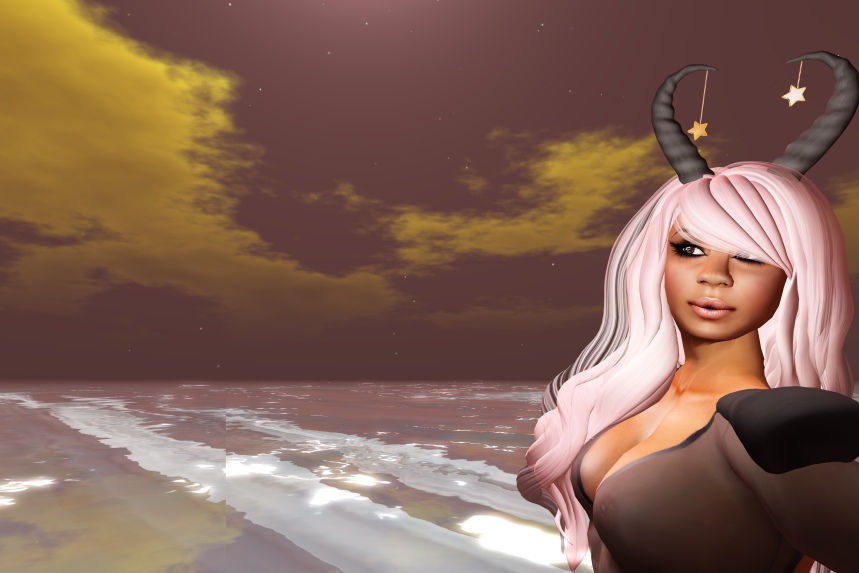 Us Brits have only really embraced the whole Halloween cult in the last decade or two, so when you read my answers to Strawberry Singh’s Halloween Meme below you will see that the UK’s attitude to Halloween is a bit laissez faire. However this is really a cautionary tale about being careful what you wish for…. after speaking to a friend of a friend of a friend I decided to use this year’s Halloween to ask the spirits for help with my artistic endeavours. However I hadn’t quite bargained for what I would have to do and what I would encounter when I got there…

This friend of a friend of a friend recounted a virtual world myth one chilly SL evening telling us about a special lagoon sim in SL that only appears, without warning for just for one week before Halloween only to vanish just as suddenly. Those that managed to find it and get there would stand a good chance of getting their cherished wishes granted. It would not appear on any map, you could not teleport there and as with all legends there would be a few riddles to solve first before entry to the lagoon could be granted. The only access was via the mainland somewhere and with luck you may find the entrance portal. I did.

I also solved the puzzles which to me didn’t seem that difficult; name ‘Snow White’s seven dwarfs’, complete the sentence ‘to infinity and blank’, is Jemima Puddleduck  ‘A) – A Parrot, B) – A Chicken, C) – A Duck’… and so on…

Once through the mainland portal I decided to travel there as you can see by giant pumpkin. I was inspired by the recent success of the real life and totally bonkers British Artist Dmtri Galitzine who this week became the fastest sailor/artist ever in a pumpkin and is single handedly keeping the myth of the eccentric Brit alive. So I knew it would be possible to sail across the lagoon to get to the right place for my incantations.

I congratulated myself on a successful journey thus far and took a moment to admire the serenity of the lagoon. 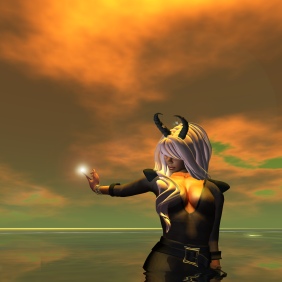 I started out by asking the spirits for help with inspiration, dedication and remuneration for my artistic endeavours and as I chanted the sky rolled through a myriad of different hues. In the far distance there was the gentle rumble of thunder.

It seemed like an enchanting place, a constantly changing palette of light, hue and shade. I waded through the shallow, still, warm waters, reciting my evocations. I wondered at the sky above and the water below in alternate shades of violet pinks and then saturated turquoise blues.

And that’s when I became conscious of a noise, a shuffling, a sniffling, was it a shriek was it a cry? It was definitely some strange presence, some…..thing and that’s when I started to panic!

Get me out of here I yelled as my winged fears began to flutter about me!!

My magic wand was absolutely no use as the jet black, red eyed bats swooped down again and again, totally destroying my mesh and prim tresses. 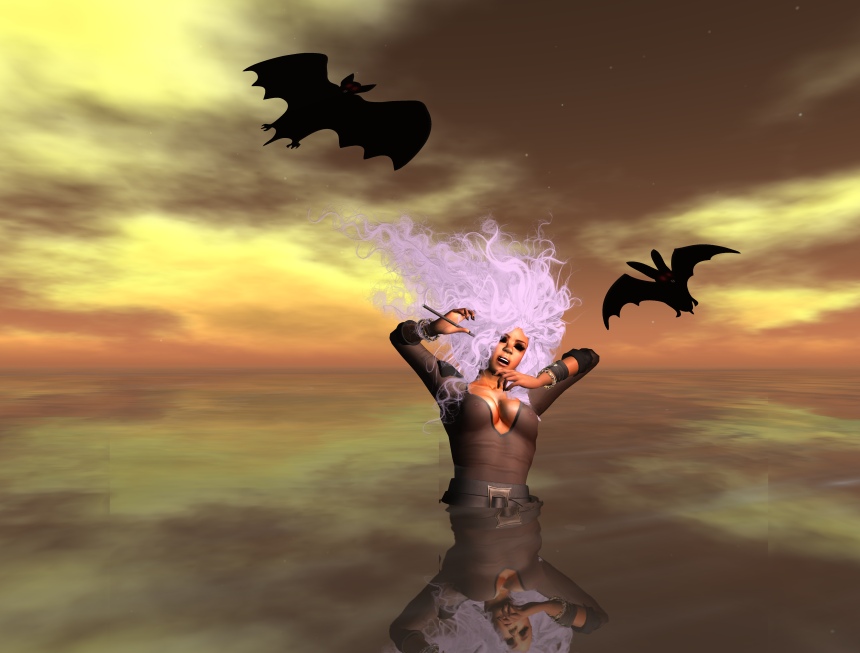 I try to fend them off with my wand but they just keep coming back!!

No please not my fake eyelashes !!!!!

I can feel my resolve to fight starting to ebb away…. 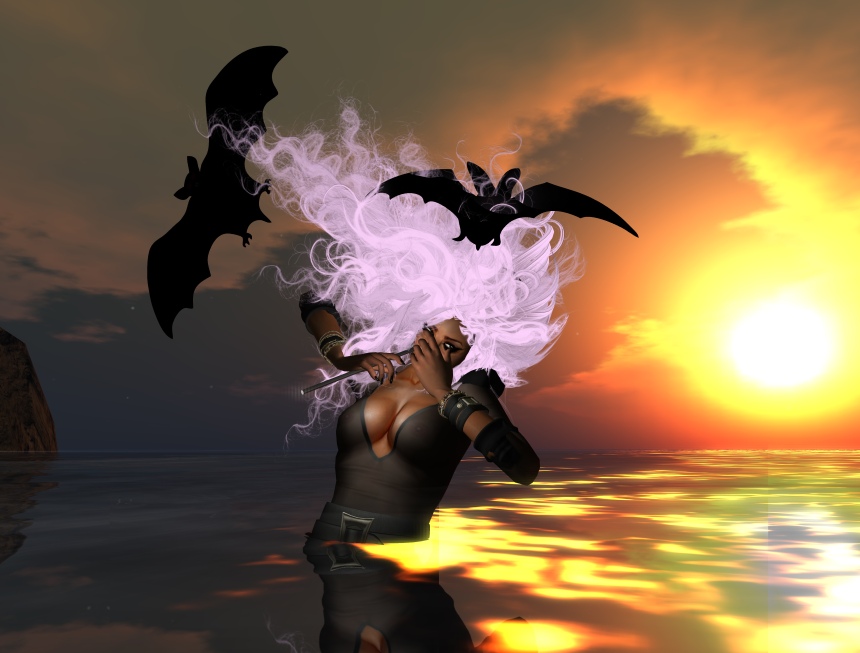 Until I remember that it’s only a computer simulated world and I can simply log out and then log back in again to relative safety and my cosy in-world home.

When I did log back in my wand and hair had totally vanished : (

The horns were still there creating a not very nice fiendish look.

Phew, that will teach me not to listen to daft old wives tales and silly myths. I don’t even like insects (of any size) let alone bats the size of cats, only time will tell if the incantations worked or not….

Poses – Some by Apple Action, some old ones and the frightened looking ones created by me

In the lagoon, no one can hear you scream

My answers to Strawberry Singh’s Meme

1.Did you go trick or treating as a child? No we never did as Halloween was never a big deal in the UK. It’s bigger now but not on the same scale as the US

2.What was the best Halloween costume you ever saw or wore yourself? A very scary looking Alice in Wonderland complete with a beheaded Mad Hatter eeeuuggh

3.What is your most vivid memory about Halloween? No real vivid memories as it was not a big deal. I remember going to some parties but Guy Fawkes the English winter festival on the 5th of November was and is bigger

4.What is the scariest movie you have ever seen? Now don’t laugh…but probably ‘I am Legend’ with Will Smith. I know, I know….but I thought it was just going to be one of those films that had a few baddies and Will Smith would come in and save the day. I was not warned about the zombies or the nihilism of the whole movie. I don’t watch scary movies any more I am a wimp

6.Are you superstitious? If so, name at least one superstition of yours. If you spill salt you must throw a pinch over your shoulder to ward off the devil…ahem…no I don’t know what it means either

What will you be doing for Halloween this year, if anything, in SL and RL? Scores of children dressed in Halloween costumes will come knocking at our door and we will give them treats. However, sometimes some of them come too late and we’ve eaten all the chocolate and sometimes all of the cake : )

2 replies to Be Careful Of What You Halloween Wish For….