Woodvale Cottage is nestled in a shady, quiet corner of Ven River. I’ve past it many times of course but only recently noticed the beautiful stone and wood building, it was as though it was waiting for me and when I spoke to one of my erstwhile neighbours I realised why.  It appears that it is  a place waiting for a new owner, someone new to love and cherish it. I asked my erstwhile neighbour Jake (the local poacher : ) for more information. He explained in that slow, careful way of his that the Woodcutter used to live there, hence the warm, rustic feel, the heavy oak floors and the lingering scent of Cedar drying or burning over open fires. I wondered why he had left such a lovely Vale and apparently in such a cloud of mystery. Jake was vague as usual, he struggled to remember exactly what had happened (the woodcutter had only left less than a year ago). Jake constantly shifted the poached rabbits and pheasants slung across his shoulder, chewing the chewing tobacco as though his life depended on it. Eventually he explained that the Woodcutter had met a young woman who had come to stay in the village for a short while to sort out her grandpa’s estate. The Woodcutter after a few too many lonely years on his own, fell madly under her spell, and fell so in love he was mesmerised by her presence. They had an all consuming affair and although their affair was all too brief, it was an intense, deep and fiery liaison. Cupid certainly missed that one as the lady in question decided to go back to old life and to leave the Woodcutter and his broken heart behind. 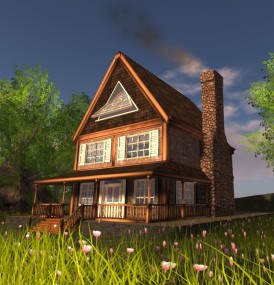 Nice awning and double doors at the back

Maybe their lives were just too different, she from the city with her worldly wise ways and he from the forest and all that entails. The Woodcutter it is told was devastated; he started drinking much more than he should, picking fights he couldn’t win, his beautiful house became shabby and run down. The forest, the place that was his dominion became overgrown, neglected and unloved. It took 8 months and the intervention of his cousin Matt to finally rouse him from his malaise and bring him back to the light. That was the turning point and eventually he decided to win back this woman whatever it took, however long it took, wherever it would lead him. He fixed up the house the best he could so that the inside decor was bright and homely, sorted out the overgrown weeds and plants around and about. He gave the door keys to Jake asking him to find someone decent to buy cottage and bring it back to love but Jake had not done that much in the last few months and in that fateful meeting he asked me to see if I could find someone to buy it instead.  That probably explained Jake’s evasiveness in explaining what had happened, he was worried I might say ‘no’.

Jake was right, although he was a long standing friend of the Woodcutter he was not best placed to sell anything. His was the poaching game and it was forest critters he was an expert in not cottages. I agreed, reluctantly at first and so here is Woodvale Cottage on this blog for you to get first sight. I’ve included some photos of the interior and she comes with some extra accessories (yet to be finalised with Jake) and apparently you can change the texture of the inside plus there are numerous blinds, shutters and privacy options for you to feel secure.

This is the designated bathroom a small quaint room

Lilac walls is one option

Or an ebony floor and aqua walls

He’s still waiting for her

It will be for sale in the next week or so just as soon as Jake and I have finalised a few things and I’ve suggested to him that the house needs some sort of manual. He did look at me blankly at that point and I’m sure I saw one of the poor bunnies over his shoulder shudder a little .. but you will be able to find an ops manual for the cottage on this blog to help you make the most of all the amenities. The sale details will be announced here as usual so if you are interested please sign up for the newsletter which will let you know when and where.

And what of the Woodcutter? Well there is a bit of a mystery around that. He did leave a few months back but apart from one or two cryptic postcards and a letter to Matt no one is sure if he met up with his woman or not, whether he will come back at all or whether he is just wandering the nation, searching for a lost love. Will he come back, who knows but best to buy Woodvale quick once it’s ready before he changes his mind.

This cottage has one wall which is just window

The woodcutter waits for his love

Night’s coming in and she’s still not here : (

1 reply to Welcome To Woodvale